Training of activist trainers on class and classism.

The Exploring Class weekend in Gloucestershire in West England, hosted by the radical nonviolence magazine Peace News, was the first training of activist trainers on class and classism that there’s ever been in Britain, so far as we know.

About a week before Exploring Class took place in June, a participant got in touch to check if there were other working-class participants coming. She didn’t want to be in a tiny minority of working-class people at the training of trainers, especially a four-day residential workshop focused on class and classism. Would this be a mainly middle-class event, with the same middle-class domination that happens in so many progressive groups? We reassured her that the majority of people coming had told us that they identified as working-class. 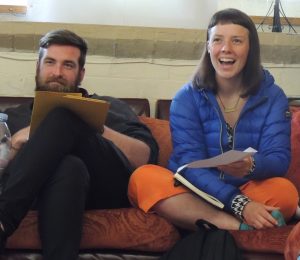 The long weekend was led by Betsy Leondar-Wright of Class Action, with two British co-facilitators: one of the most experienced activist trainers in the UK, Kathryn Tulip of the Navigate training collective, and me, Milan Rai, editor of Peace News, and graduate of the Seattle 2016 Class Action training of trainers. Kathryn is from a white working-class background, raised in the North of England, and I’m a first generation South Asian immigrant from a professional-middle-class background.

One goal of Exploring Class was to give people a chance to strengthen their facilitation skills and their ability to apply those skills to class issues. Most people agreed that we  achieved this aim. One person wrote afterwards that she’d improved her own facilitation abilities, and had increased her confidence in facilitating proactive dialogue. Someone else wrote: ‘I’ve given up having expectations of training because so many trainings can be disappointing. This training did not disappoint and I am taking away things to think about and a list of action points.’

Another goal was to start a network of UK trainers who want to work on class and classism. The workshop did support new connections between people, as well as ongoing group work for an online reading group which includes many of the participants. We’re reading chapters from Betsy’s terrific book, Missing Class: How Seeing Class Cultures Can Strengthen Social Movement Groups, and talking about them using Skype video. 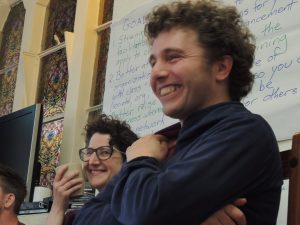 Another core goal of the training was to share exercises developed by Class Action in the US. Generally, people thought they were also useful over here in the UK. One day, the UK folks delivered their own – slightly-altered or completely transformed – version of one of the Class Action tools they’d experienced earlier. (We also had a French participant.)

We also shared some Training for Change (TfC) tools, including a UK version of a TfC exercise on wealth inequality. To help people explore these shocking injustices, we gave people jelly babies to demonstrate how much wealth the super-rich own. (In the UK, we have jelly babies, not the jelly beans you have in the US; our babies are softer and squidgier than your beans.)

A couple of months after Exploring Class, I went to the Earth First! Summer Gathering. When I got there, I saw in the programme that there was a two-hour workshop on class. When I went along, I discovered that the workshop leader was Mark from Manchester, and he was delivering a shortened version of the Class Action three-hour workshop that we’d shared at the June training! 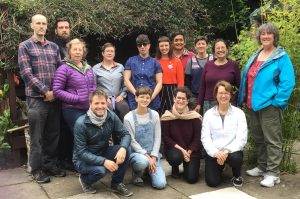 This is just one of the many workshops on class and classism that have sprung out of, or been enriched by, Class Action’s Exploring Class training. I know I speak for all the trainers and facilitators who were at the residential retreat when I express enormous gratitude to Class Action as an organisation, and to Betsy Leondar-Wright as a person, for all that we learned over that long weekend in Gloucestershire.

Milan Rai is the editor of Peace News, based in London, England, and is the author of several books including Chomsky's Politics (Verso, 1995).