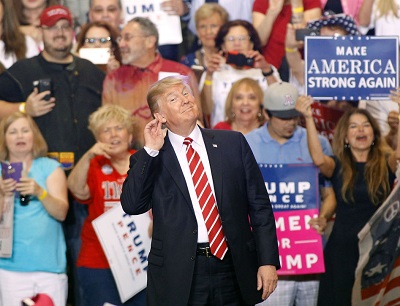 A May 2018 report by Philip G. Alston, a U.N. special rapporteur, examines poverty in the United States. The report findings were based on 40 detailed written submissions and Alton’s in-person meetings with government officials at all levels; members of Congress; nonprofit and religious leaders; academics; indigenous people living in poverty in several U.S. states.

The report, which also cited a correlation between poverty and race, stated that the country’s “overall policy response has been neglectful at best” for more than five decades. And it concluded that the past year’s Trump Administration policies have accelerated the severity of poverty in the United States. This conclusion is in stark contrast to a 66-page July 2018 report by President Trump’s Council of Economic Advisers that essentially says that poverty is no longer a problem in the United States.

The CEA report finding is in line with President Trump’s policies and budget and policy proposals. They reflect the belief held by some clueless owning-class people that everyone has an equal chance to achieve if they simply put their minds to it. Others in the president’s inner White house circle, people like senior advisor Stephen Miller, are not clueless at all but knowingly push policies that reflect class and racial bias.

First, the administration has chosen to measure poverty by how much a family spends – not the traditional method of using the official poverty numbers released by its own Census Bureau. (Of course, many of us with considerable class advantage spend considerably more than we earn due to easy credit.) This method of measuring poverty masks these facts: About 40 million Americans live in poverty, 18.5 million in extreme poverty, and 5.3 million live in developing nations’ conditions of absolute poverty. According to Rev. Ira Acree, there are children of color growing up in Chicago’s Southside in substandard housing that lacks even working indoor plumbing.

Believing that classism and racism play no role in poverty leads to a 2019 presidential budget that calls for a nearly 30 percent cut to the Supplemental Nutrition Assistance Program (SNAP, formerly food stamps). According to the Center on Budget and Policy Priorities, a radical restructuring of the program will mean that at least four million people will lose eligibility and more than $213 billion will be cut from the program over the next 10 years through benefit delivery. “The unemployed, the elderly and low-income working families with children would bear the brunt of the cuts.”

The White House budget also proposes to cut more than one-fifth of the Labor Department’s funding to the tune of $2.6 billion for programs like Job Corps, which trains to low-income youth to be job ready. The budget would also cut worker-safety training programs, training for migrant farmworkers and gut a program that employs seniors. So much for helping people leave poverty through work, as the CEA advised.

[gdlr_quote align=”center” ]A May 2018 U.N. report concluded that the past year’s Trump Administration policies have accelerated the severity of poverty in the United States.”[/gdlr_quote]

Education secretary Betsy DeVos would oversee $7.5 million in cuts to the Education Department and wants to offer over $1 billion for school vouchers. And, Senator Patty Murray (D, Wash.) called DeVos cruel for her reversal of the Obama-era policy of loan forgiveness for students that received predatory loans from questionable for-profit postsecondary institutions.

These budget cuts – and many more – are necessary to offset the $1.5 trillion in revenue that will be lost to the country in the next 10 years by the Tax Cuts and Jobs Act of 2017. The law will allow corporations and the most class privileged individuals to save billions while providing modest upfront benefits to people with moderate class advantage, and the benefit cuts cited here and so many more for those in the United States with the least.

And Then There’s the Bias Thing

Coupled with Trump Administration policies that at best neglect and at worst worsen the lives of the nation’s least advantaged people are policies that an increasing number of Americans call racist. The administration is notorious for its antipathy to certain types of immigrants. From trying to end DACA, the Deferred Action for Childhood Arrivals program, to separating children (including toddlers) at the southern border from their parents and then locking them up, the administration appears to be singling out immigrants of color.

As of August 2018, the administration is also working to make it harder for legal immigrants to become citizens or get green cards if they or their family members have ever used a range of social services, including Obamacare.  The administration is even looking at taking away a path to citizenship from people who have served in the military.

The administration’s affirmative action rollbacks and the Justice Department’s work to examine “reverse discrimination” and so-called (and unfounded) “voter fraud” reflect the administration’s desire to resurrect 1950-era American policies that it believes made America great – for a narrow group of people. The department’s return to failed drug enforcement policies, abandoned because they were found to be racially biased, ensures longer sentences for people of color – and poor people.

The February 2018 report by the EPA’s National Center for Environmental Assessment confirmed that people of color are much more likely to live near polluters and breathe polluted air, proof of environmental racism. However, the Atlantic reveals that“under the guidance of President Trump and Administrator Scott Pruitt, the EPA has begun to walk back already anemic federal environmental-justice work, putting a stop to some civil-rights investigations and replacing or firing many of the scientists with deep technical knowledge of the subject.”

And from its beginning, the administration showed its hand with the “Muslim travel ban,” which targeted brown and black people.

Of course, President Trump seems to provide fertile ground for these policies with his own actions and comments. With his constant comments about the gang MS-13, he suggests that all Latinx people are rapists, drug dealers and criminals. Why wouldn’t the country try to stop them at the border? His constant reference to famous African Americans’ low IQs makes it easier to roll back affirmative action and defund public education.

And if some people are lazy and others are hard-working, smart and deserving, why wouldn’t a tax cut for the wealthy and corporations be good for the country? And we haven’t even touched on the president’s Supreme Court appointees and nominees, who reflect the administration’s class and racial priorities.

What Do Class Bridgers Do?

So, the question I pose to you, dear reader, is what do we do about policies being enacted by the Trump Administration? Do we return to the 1950s, or do we Make America Great and continue the fight to make the country class-inclusive and culturally diverse?

What are your ideas? What do you see happening towards this end in your community or across the country? Please share your ideas. We need them now more than ever.