While summer 2018 has been a scorcher, the high for February 1st and 2nd made it to 11º in Kari Fisher’s hometown in Minnesota, and single digits reigned during both school days. 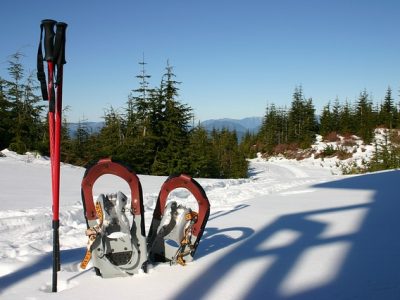 I got the email from one of my son’s high school teachers while I was teaching and didn’t have a chance to read it until after five when my workday ended. I hurried to pile my nightly grading into bags and dash to meet my son at the public transportation stop just before six. There would be supper to put on, dishes to wash and grading before bed.

The day-before field trip reminder from the teacher about an outdoor snowshoeing winter wonderland adventure was certainly friendly enough. I’d managed the fee ($40 dollars) a while before when I’d been flush back in October.

What hit me was the “basic winterwear advice for outdoor activities” requiring boots, two layers for legs (long underwear or snow pants in addition to pants), four layers for the core (again, the long underwear!), hat/gloves/scarf, and a “good” winter jacket. Wool socks were also suggested. If I had any question, I was, with kind regards, invited to email the teacher.

Except that three dollars, all that was left from my last paycheck, wouldn’t be enough for thrift store anything that night, and the thrift stores would be closed when he needed to get on the bus the next morning. Except that his coat which he claimed was “good enough” wasn’t good enough for a day of snowshoeing. The growth spurt had left him with shoes and no winter boots. He had a thin pair of gloves and sweat socks (which are awful for the cold).

As someone who has lived in eight states, all of which have blizzards, I’m no stranger to winter preparedness. My first thought was shame: How could I have neglected such basic necessities? Why wasn’t I better organized? Why hadn’t I, as middle-class financial experts suggest, managed to put away several months of pay (not even a spare 20)? Why hadn’t I remembered that this was coming up? Well, I hadn’t, and beating myself up wasn’t going to warm anyone during the next day.

[gdlr_quote align=”right” ]Time and money are the dual enemies of being broke – something that well-meaning people just don’t get.”[/gdlr_quote]

And then I turned to the patron saint of single parents: our Lady of Contingency Plans only to discover that Plan B had long before headed south.

A radio program interviewee once likened single parents, particularly mothers, to the clichéd basket of crabs who allegedly pull one another back to captivity rather than celebrating the success of others escaping. Instead of banding together, these mothers, um parents, tend to not have the wherewithal or resources to share with each other. They may have good intentions, but the reality is that these people have nothing to give.

Bullshit. I’d thought of my cousin, a single parent who worked just-shy-of-full-time in daycare who would show up with her son for dinner and sleepovers towards the end of each month, and then a week later appear again with post-payday splurges of fried chicken and pop for my kids.

I wish I could tell you about the miracle finds at the thrift stores, or about how friends on social media bailed me out with boots that fit my teen who had grown three shoe sizes in a year). I wish I could tell you how I spoke to the teacher, and we worked out something or there’s a different policy now. But time and money are the dual enemies of being broke – something that well-meaning people just don’t get. Don’t have money for the band boosters club? Well, you can volunteer for an extra 10 hours!  Simple enough.

But there wasn’t time. My son begged me not to contact his teacher. Then his symptoms began: a sore throat, a headache, a stomach ache, a cough and, finally, a fever.

Payday came and with it, a liter of 7-Up and chicken soup.

Kari Fisher lives in the Twin Cities. A single parent, she works at Normandale Community College and has taught adults (college, GED classes, ESL, community and corrections) for almost 30 years. She's also waited tables, chatted people up in telemarketing and at a McDonald's drive-through, worked retail and more. She has an MFA in Creative Writing from Rainer Writers Workshop. She also lived and worked in hospitality houses for the homeless.