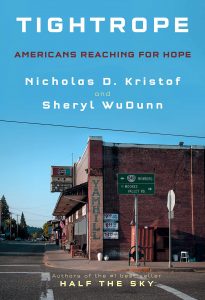 An essay adapted from Tightrope: Americans Reaching for Hope, the new book by New York Times columnist Nicholas Kristof and Sheryl WuDunn, appeared in the paper’s Sunday Review section on January 9th. Focusing on “deaths of despair” occurring in the Oregon county where Kristof has roots, the piece tries to square common tropes about how those with social privilege and power write about poor people in the paper of record. To their credit, Kristof and WuDunn point out structural problems, name capitalism, and acknowledge the problem with attributing poverty to cultural deficiencies. But like many in their New York media ilk, they fall for oversimplified analysis, like shaming working class “survivors” for voting Trump into office, despite Trump’s base spanning the income gamut. The way Kristof and Wudunn portray their subjects often exists on a see-saw of pathologizing addiction or glamorizing mainstream notions of success as in the case of Andrea “who was smart, talented, gorgeous and entrepreneurial, ran her own real estate business but accelerated her drinking after her dad died”. While the authors write from a tightrope of good intentions, often quite insightfully, they still don’t avoid the common tropes about working poor and working class people so often circulated on the left.

In Kristoff’s follow up essay, where he addresses critics’ preoccupation with a narrative of personal responsibility that blames people for their suffering, he again misses an opportunity to more explicitly name the vital structural changes we need to our economy in order to recover our decimated communities. Naming the emotional, psychological and physical suffering of the working class as a result of a lack of good jobs and investment in human capital, drugs, and a harsh narrative internalized by workers has value. But the harm will not be resolved by a return to an “inclusive capitalism” like we had in the postwar era. Kristoff’s call to collective social responsibility enacted with “helping hands” infused with empathy, particularly for children, is not the solution for millions of adults who contend with the effects of policies that concentrated wealth and resources for the richest people in the country. At the bare minimum, we need an immediate surge of political will, with the support of middle and upper middle class people, to bring money back to communities like the one Kristoff describes; in the form of quality education, jobs, housing and healthcare. Showcasing stories of despair may inspire some people to care, but many already do, and what we need is a clear pathway to creating change.

Will Meyer (“Ace”) is a writer and musician. He is editor of The Shoestring, a local online publication in Western Massachusetts. Rachel Rybaczuk is the Interim Executive Director at Class Action.

Will Meyer (“Ace”) is a writer and musician. He is editor of The Shoestring, a local online publication in Western Massachusetts.