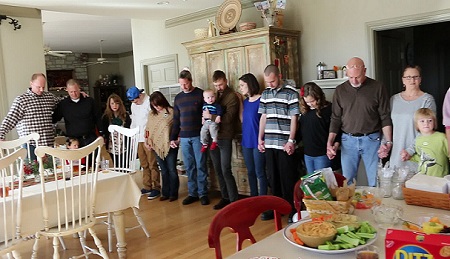 I am the youngest of 10 siblings. My dad built a successful plumbing business, bought his own shop and employed a few helpers at the height of his business. He even bought a summer home, a Civil-War-era farm out in the country, which he later sold to pay my sibs’ college tuition.

My older sibs attended Catholic high schools and colleges. They did not work and their stylish clothes came from department stores, (which I only learned lately). But by the time I was to enroll in Sacred Heart, the all-girls high school my sisters had attended, my dad’s income was declining because he was too old for the hard physical labor of plumbing. My parents could not afford private school tuition for me, so I went to public school.

Starting around sixth grade, my mom made my clothes, or I wore hand-me-downs. She made me a blouse that I still have (!) out of a skirt she’d made for my eldest sister. Later, I shopped at thrift shops or made my own clothes. It was the 1970s, so I was in style, even wearing my brother’s jeans with so many patches that they could practically stand up by themselves.

My birthday is at the start of September, and my presents were usually practical things I needed for school: socks, shoes and books. I didn’t really crave material things, so it didn’t matter that much to me, except I remember not even asking for the ballet lessons I craved. I was thrilled when my mom got me a portable radio for my 13th birthday. I knew it was cheap, but it was mine.

Though my sibs had enjoyed a higher standard of living when my dad’s biz was in its salad days, I didn’t notice the difference because I had either not been born yet (17 years between me and my oldest sib) or too young to pay attention to money.

We had never been flush. Any candy bar (except at Halloween) was divided up and shared. A stick of gum was ripped in half and shared. I thought this was normal, of course, and sharing a virtuous thing. I still think that. But as an adult, my next oldest sib, Tony, made a big thing out of never having to share any treats – out of having his candy bar all to himself. So much for virtue, obviously he felt deprived. At Christmas, we woke to oranges and walnuts in our stockings. Later, I saw that in an old movie about a poor family celebrating Christmas and was surprised: What, we were poor?!?

[gdlr_quote align=”right” ]I never felt the lack of money, but cost was always a weighty and serious issue. As my dad got older and made less money, my parents’ financial worries increased and steadily shrank their world.”[/gdlr_quote]

My sibs never worked as teens, which I didn’t learn until I was 60 (!). I assumed they had all started working in high school. I first worked at 15, as a maid and have been employed full or part time ever since. I was never sorry to have to work; it felt normal to me, and I liked having spending money. I remember being proud and excited to have saved up $45. At 16 it was the most money I had ever had.

So though we weren’t poor, we rarely went out to eat or to the movies. I can remember my brother Mike taking me to see The Beatles’ Hard Day’s Night, and going to the drive-in with my brother Pat and his wife Mary to see Ryan’s Daughter. We only had soda pop on special occasions. I first went to the theater when I was 12, summer stock, and it bowled me over.

But family life was rich: lots and lots and lots of relatives, friends, sleepovers, parties, singing, dancing, cooking. Everything was a group event: dressing, walking to school, attending church, watching TV, arguing politics around the dinner table. My parents really lived out the idea of the more the merrier!

But on Sundays, usually family-visiting day, my Uncle Frank, my mother’s brother who was a butcher, would never stay for dinner. It was an uncomfortable moment for my mom, when he predictably turned down the dinner invitation every time. I realized later Frank didn’t want to eat the cheap cuts of meat my parents could afford. Or maybe he felt like he would be taking the food out of our mouths? We sat 13 for dinner every night! My parents, though, despite their full house, were the ones who took in my grandma, my mother’s mother. She lived with us until she died when I was 14. She didn’t have any money either, so my sisters permed her hair at home.

When I went to college, which I paid for myself with loans and work-study jobs, my eldest sister bought me a winter jacket, and that was a big deal. It cost $19.

So though we were never poor, we skimped and saved. We ate plain food (I loved fried baloney) and wasted none of it, asking each other, “Are you going to finish that?” My parents grew up in the Great Depression: name it, they saved it. My dad always cut my hair in a Dutch bob, until he cut off a tiny bit of the bottom of my earlobe! Each year buying my school shoes was an investment, carefully thought out. We almost always walked or took the bus.

I never felt the lack of money, but cost was always a weighty and serious issue. As my dad got older and made less money, my parents’ financial worries increased and steadily shrank their world. My eldest sister died very suddenly when I was in college, and we all were devastated. But when I learned her life insurance settlement would go to my parents, I was grateful. It was like she was looking out for them in their reduced circumstances, in their genteel poverty.

Nancy McGartland is a retired college adjunct who taught writing, so she's always been "next door to poor." She's trying to write a novel and works at being politically active with the Monadnock Progressive Alliance in Keene, N.H.