As a first-generation, low-income college student, I knew that the feelings of inadequacy I was having were my own version of imposter syndrome. I had never been to an academic conference, and here I was standing outside the Centre des Congrès de Quebec, about to present at one of the most prestigious conferences in the sociological field, the American Sociological Association Annual Meeting. It was 2017, and my co-authored book chapter Bringing Class into the Classroom had been accepted as an official ASA session and was receiving interest from a number of working-class academics. 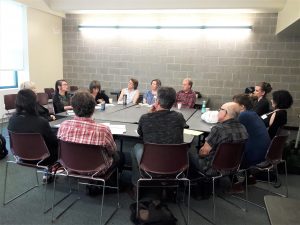 When the 2018 Working Class Studies Association (WCSA) conference proposals were invited, I felt this might be a unique opportunity to bring poverty-class voices to the forefront within the Working Class Studies field, which already had a Working-Class Academics section. I reached out to my network, and two people emerged as fellow collaborators: one who I had met briefly years before, Rachel Rybaczuk; and someone completely new to me, Megan Osborne. Together we crafted our panel proposal, Locating Pride with the Poverty Class and found our way to Stony Brook University to present. Our audience included a cross-section of men and women, from different types of college, and from across the class spectrum. A number of conference organizers were present, as they listened for ways they might better support and promote poverty-class voices within this academic space.

The success and enthusiasm generated from the session opened our eyes to a need for further opportunities to approach this topic. This past summer, Megan spearheaded the development of the Poverty Class Caucus within the Working Class Studies Association, which Rachel and I supported. We are a new caucus just beginning to build our membership, and are excited to see what this next chapter will hold for us and the poverty-class-raised community in academia.